Have you noticed something different? Much as I love this site – it has served me well for over five years! – I am movin’-on-up to fancier and schmancier pastures! Please come visit me at my NEW site at my OLD address, if that makes sense: robintatlowlord.com is still my home, but it’s different now! This will still be my blog / news page for a while, though – and I apologize for any confusion caused in the changeover (I think all the URLs will have changed back to wordpress.com when I swapped the domain mapping, blah blah blah, yes it’s all very technical and high-falutin’, thank you)

If you’re still confused here is a handy diagram.
If you’re here, and want to go to the new site / fancy portfolio:

If you’re there in Fancyland but want to come back and read my blog / find old posts:

Thank you for looking at my pictures and reading my words here – I appreciate it! I hope you like the new site, too!

My whimsical little comics-short-story project, Pettyfolly, is now online as a webcomic! The first story, Lullaby, about a cranky giant and an opportunistic forest imp, is a few pages in already – and the comic will update with a new page every Monday and Wednesday. I hope you enjoy it! 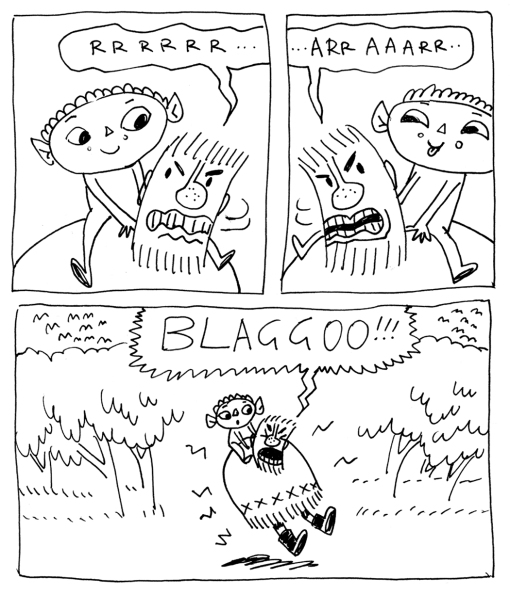 Goodness me! Whatever next? This baby has little to no grasp of proper etiquette. I can’t think WHY she was invited in the first place!

Yep – I’m a superhero now! Well, Bobby Dazzler is my roller derby name, which is kind of like a superhero alias already. And my sidekick Diggle is equally fierce. The neon is important. Very important. You might say it’s the source of my powers! This is a brush pen drawing, colored in Photoshop.

Here is a sampler of my previous animation work, including explainer videos, promotional videos, an educational cartoon, TV commercial AND a sneak preview of my unreleased second independent short, Donut Gatherers!

“Stamp your feet and clap your hands with Farida the Flamenco Fairy and friends!”

The show, created by Studio Flamenco, will stomp its way into the Adelaide Fringe (the largest annual arts festival in the Southern Hemisphere) in March. If you live in South Australia – or you are one of the 90,000 visitors who flock there for the Fringe every year (it’s hands-down the best time to visit) – you can buy tickets here.

This illustration was created as an ink and brush drawing with nib pen details, and colored digitally. As I’m across the Pacific, in California, I’m stoked to have contributed (even a little) to the color and energy of the Adelaide Fringe… ¡Ole! 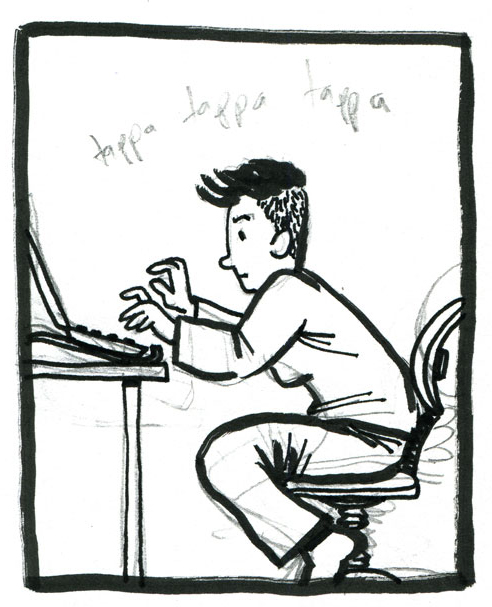 I’m back in the studio and finally giving this site some love – I’m excited to share what I’ve been up to over the last few months! Me and my scanner have been busy – expect plenty of posts in the coming weeks. 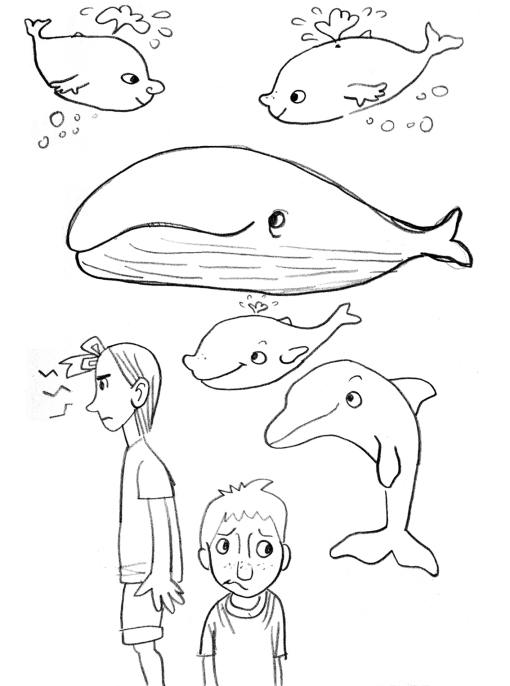 I have started a separate blog for my current project with Guildhouse and the SA Museum: Whale Windows

It’s a cross-platform, interactive project exploring the narrative potential of flawed human attempts to understand, and relate to, mammals as massive and seemingly ‘alien’ as whales.

I’ll be exploring the Museum’s world-class Marine Mammal collection; collaboratively generating fanciful, empathetic stories about humans and whales through workshops with kids, and then creating a  interactive display of comics, artwork and animation that playfully weaves together fact and fancy, and speculates on emotional connections between our very different species.

I’ve just had my first day exploring the amazing collection, the kids’ workshops are next week and the exhibition will be up at the Museum around July or August.

The Huffs and the Budges

This project was a picture book commission from Family By Family

I devised, wrote and illustrated the rhyming story, following their brief of introducing the concept of family matchups to small children whose parents are interested in sharing ideas and support with a nearby family in need.

This book was heaps of fun and I enjoyed the writing time (almost) as much as the illustrating!

Another animation project completed and online! This time it’s a promotional cartoon for The Wishing Well Series’ crowd-funding campaign on Pozible.com.

This is the third short animation I have made in less than 12 months and the learning curve keeps on looping upwards! I have really enjoyed the challenge and problem-solving involved in working on such diverse projects in a relatively short space of time.

For the first time, the main characters, script and general style were provided by my client, so I was entirely focused on creating the animation itself. Apart from my initial storyboard, all the art for this cartoon was drawn entirely within Photoshop with a wacom tablet, a first for me. I love pencil and paper, but the speedier digital work-flow made me a lot more efficient. Once my client and I were happy with the rough animatic, I adapted the drawing style of Poppy and Bob (originally very clean vector images) to something I could more closely replicate with my own, scratchier-textured tablet drawings, before expanding on their expressions and movements from the static source illustrations. Then I moved on to creating all the secondary characters in a consistent style, which was great fun: designing new characters is one of my favorite things! On this project I utilized and honed many of the skills I developed in my last two animation projects, as well as trying some brand-new (to me) tools; coming to know Creative Suite far better than ever before… PUPPET PIN TOOL, WHERE HAVE YOU BEEN ALL MY LIFE!??

I also managed to sneak a little roller derby into this project… I couldn’t resist!